Jews and Gentiles in the Gospels – What is a Gentile?

Initially, Jesus instructed his Apostles to avoid the Gentiles and reach out only to the Jews — the “lost sheep of Israel.” Later in the Gospels this will start to make more sense, but for now, we need to at least understand the difference between the two groups. It is pretty simple actually — a “Jew” was anyone who belonged to one of the twelve tribes of Israel, and a “Gentile” was everyone else. The word “Gentile” is of Latin origin and means “belonging to a people.” However, as typically used in the Gospels, “Gentile” simply means “non-Jewish.” Gentile really isn’t the most precise word to describe the non-Jewish Hellenistic culture of the day, but since the Gospels use the term, we’ll stick with it for our purposes.

The differences between the two groups are vast and can be seen in what they ate, how they dressed, how they washed, how they worshipped, and what their art, academics, language, and social customs looked like. Even their architecture was different. At the center of the Jewish culture were the Hebrew Bible and the writings of their rabbis. Jews believed in one transcendent God who created the universe and everything in it. They also believed that they were God’s chosen people. The Hellenistic culture in the area was more of a free-for-all of Greek and Roman mythology, morality, philosophy, and politics.

Jews and Gentiles in the Gospels – The “Other Side”

The Greeks, and then the Romans, had built up ten cities known as the Decapolis to the south and to the east of the Sea of Galilee. These cities were exemplars of Hellenistic culture and power – temples to worship idols, bathhouses, stadiums, and theaters. These were unclean places to go and represented a sinful presence in the land. It was “all bad” in the eyes of a practicing Jew.

Now remember earlier, when Jesus sent his Apostles out, he instructed them not to go to the Gentiles, but to the Jews. And also remember that Jews saw non-Jews as ancillary to God’s overall plan. So Jesus was making a pretty surprising statement to his disciples here… the Kingdom of God would now be shared with the Gentiles who lived on “the other side.”

While on their way, the Gospels record that a sudden storm kicked up and the disciples were very scared. They probably also considered that the storm was a confirmation that they should not be going to the other side. It’s not uncommon on the Sea of Galilee during late Fall and Winter for storms to form very quickly and unexpectedly from the higher elevations on the east side of the lake. Within minutes, the lake can produce 6-foot waves that could easily swamp a first century Galilean boat. 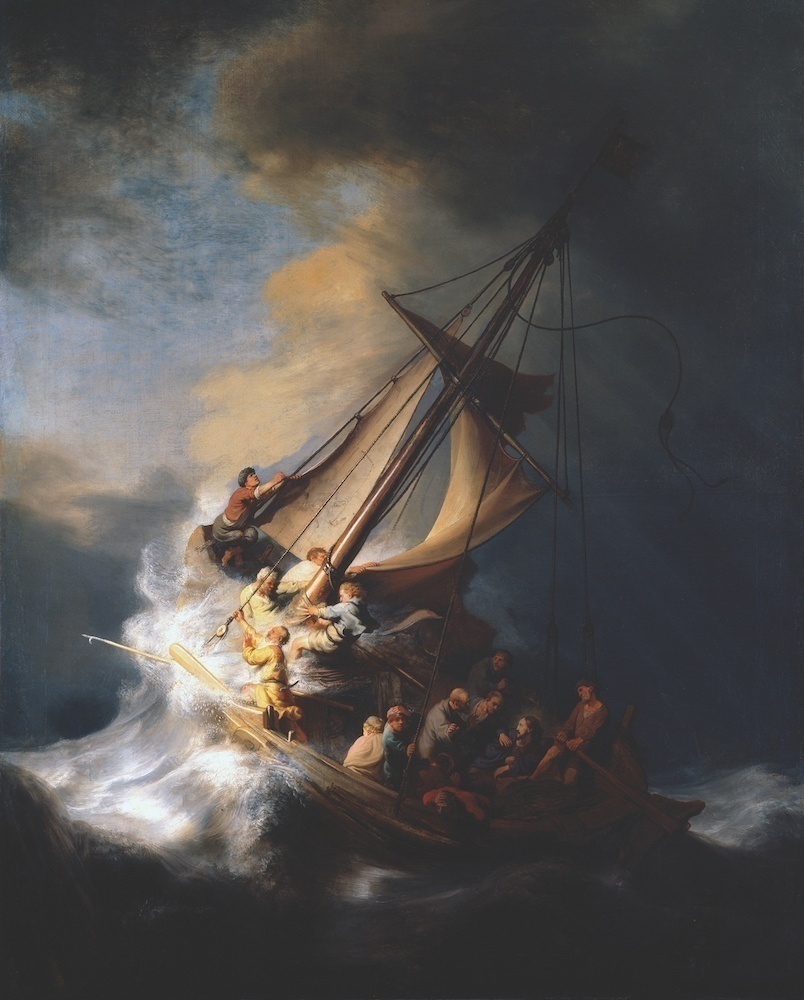 So, a trip to the “other side” soon became a teachable moment for Jesus who, by the way, seemed pretty relaxed considering the situation:

Jesus was in the stern, sleeping on a cushion. The disciples woke him and said to him, “Teacher, don’t you care if we drown?”
He got up, rebuked the wind and said to the waves, “Quiet! Be still!” Then the wind died down and it was completely calm.
He said to his disciples, “Why are you so afraid? Do you still have no faith?”
They were terrified and asked each other, “Who is this? Even the wind and the waves obey him!”
(Mark 4:38-41)

Supported by a grant from
the Michael Reese Health Trust